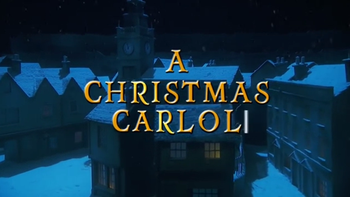 It goes hilariously downhill from here.
"I would have to be completely incapacitated to pull out now!"
—Chris, after Robert demands that the latter play Scrooge instead
Advertisement:

Following on from the disaster that was Peter Pan Goes Wrong the previous year (2016), the Cornley Polytechnic Drama Society have been banned from ever appearing on the BBC.

Undeterred, the crew sneaks into BBC Studios and forcibly hijacks a production of A Christmas Carol starring Sir Derek Jacobi, and try their best to put on a good show. Unfortunately, however, things go wrong from the get go.

This film was followed by The Goes Wrong Show.