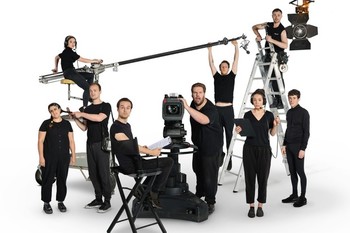 "They kiss. Roll credits."
—Dennis, at the end of "A Trial to Watch"
Advertisement:

The Goes Wrong Show is a BBC comedy anthology, created by Mischief Theatre, that debuted in 2019.

The Cornley Polytechnic Drama Society has been commissioned to produce Play of the Week, a televised series of short plays on the BBC. Unfortunately, despite everyone's best intentions, each production inevitably goes wrong.

Some members of the cast recorded "Goes Wrong Alongs", episode commentaries to give viewers a glimpse at their creative process, bits that had to be cut, and behind-the-scenes trivia. These can be seen on the Mischief Theatre YouTube channel