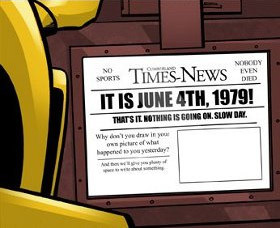 Slow news day?
"Having crammed on time travel movies before their first time heist, Steve knows the best way to find the date and place is to look for a stray newspaper."
— Returning the Stones
Advertisement:

A Time Traveler may not want to confuse random passers-by by asking them "What Year Is This?", so they'll find a newspaper or other conveniently dated artifact instead. A standard joke has one character using the architecture, the fashions, the technology, and the incidents on TV to come up with a guess at the year, only for someone else to correct them after reading the paper.

Technology Marches On, and while they continue to be printed, it is still to be seen how long newspapers will be available to check this in runs to the future, what with the prevalence of people reading the news on their smartphone on their way to work. Though of course this trope probably won't ever be truly discredited, unlike most tropes involving newspapers, since time-travel can still always bring a character to an era where newspapers were more relevant.

Not to be confused with personal ads, or with Authentication by Newspaper, or with two people dating and it having something to do with a newspaper.