Acquired Error at the Printer 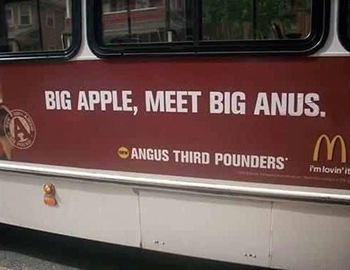 Ouch.
Mr. Brittas: It says "pool". The l's got pushed around the corner a bit, that's all.
Julie: Well, it definitely says "poo" on mine.
— Gordon Brittas and Julie Porter, The Brittas Empire, "Two Little Boys"
Advertisement:

Fictional print shops are the most unreliable businesses ever. Any poster, sign, flyer, T-shirt, or other item which contains text they produce for their clients is going to have a mistake on it of some sort. Usually the mistake is extremely minor, like adding or omitting a single letter or punctuation mark, but completely changes the message to be awkward, embarrassing, or even offensive.

Before the advent of desktop publishing, traditional printing techniques required text to be laid out by hand on a metal plate. Documents, such as books, can contain thousands of characters, so one can understand how mistakes can slip through unnoticed. There's less excuse for these mistakes in signs, posters, or the like, as these contain significantly less text which makes it much more clear when a mistake is made.

In newer works, the mistake is usually blamed on the person who typed or created the document. Typically a Discredited Trope, which is usually parodied or played for laughs.

Can result in a Manual Misprint or Typo on the Cover. Sister Trope of Auto-Incorrect (where the error is introduced by a spellchecker or autocorrect software) and Virtual Assistant Blunder (where a voice-control device misinterprets a command).

The leisure centre is celebrating its anniversary this episode, and Mr. Brittas has ordered some badges for the occasion. Too bad that they've been misprinted.

The leisure centre is celebrating its anniversary this episode, and Mr. Brittas has ordered some badges for the occasion. Too bad that they've been misprinted.