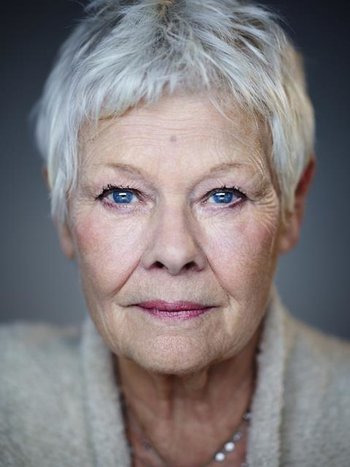 I am very disappointed in you, 007!
"It is true that there are few plays of Shakespeare that I haven't done."
— Judi Dench
Advertisement:

Dame Judith Olivia "Judi" Dench (born 9 December 1934 in Heworth, England) is an award-winning English actor and right up there with Helen Mirren, Emma Thompson and Maggie Smithnote a lifelong close friend in terms of being completely awesome. While she previously worked mostly in theater — notably with the Royal Shakespeare Company — she has become more prominent as a movie actor since she took on the role of "M" in the James Bond series.

She's also famous for winning an Academy Award for her role in Shakespeare in Love, where she stole the film with a grand total of nine minutes of screen time as Elizabeth I. Ironically, she had previously been nominated for Best Actress for playing Queen Victoria in Mrs Brown, losing to Helen Hunt.

Ofcom, who handle complaints about television shows in the UK, sometimes refer to the "Judi Dench effect", noting that any swearword spoken by Judi Dench will result in more complaints than the same swearword spoken by anyone else. Which is kind of ironic, because, in her role as everyone's favorite cool auntie, she seems perfectly comfortable unleashing the occasional Precision F-Strike when necessary.

Word of God says she DM's for her grandkids, which is made of so much ridiculous awesome and win. Once word of this got out, no self-respecting geek would call her anything less than "Dame Judi Dench". Vin Diesel actually pushed to have her in The Chronicles of Riddick just so they could play the game togethernote He was so grateful for the experience that he sent her fresh flowers throughout the production.

The ringtone on her phone is the James Bond theme. Apparently, it often went off in her scenes in the Bond movies, on-set hilarity ensuing.

While it has come to light that her eyesight is failing, Dench is adamant that she has no plans to quit acting. In addition to her acting work, she serves on the advisory board of the American Shakespeare Center in Staunton, Virginia, co-founded by her friend Dr. Ralph Alan Cohen. She is also one of a small and incredibly privileged number of people to have read published obituaries - to themselves - whilst still alive. Fortunately, as of 2018, Judi Dench is not dead and is still acting. She has, most recently, appeared as a princess in the 2017 version of Murder on the Orient Express with Kenneth Branagh. She's also very scary.

Referred to by Roman, from Sanders Sides, as "Queen Groovy Binch".