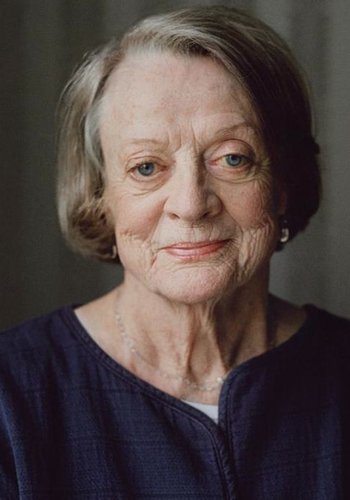 "There is a kind of invisible thread between the actor and the audience, and when it's there it's stunning, and there is nothing to match that."
Advertisement:

She has had an extensive, varied career in stage, film and television spanning over sixty years. She has appeared in over 50 films and is one of Britain's most recognizable and respected actresses. In 1990, she was made a Dame Commander of the Order of the British Empire by Queen Elizabeth II for services to the performing arts.

On screen, she first drew praise for the 1958 crime film Nowhere To Go, for which she received her first BAFTA Award nomination. Her 1965 film role as Desdemona, in William Shakespeare's Othello, earned her an Academy Award nomination (the first of her six) and a Golden Globe nomination. Since then Smith has worked consistently in film, television and stage.

She has won numerous awards for her acting in theatre, film and television; including seven BAFTA Awards (five competitive awards and two special awards including the BAFTA Fellowship in 1996), two Academy Awards, three Golden Globes, three Emmy Awards, three Screen Actors Guild Awards, a Tony Award, and an Honorary Olivier Award. Smith is one of the few actors to have achieved the Triple Crown of Acting. In September 2012, she was awarded the Stratford Shakespeare Festival's Legacy Award, which she accepted from Christopher Plummer, who presented it to her in a ceremony at the Fairmont Royal York Hotel.

She is the mother of actors Toby Stephens and Chris Larkin.

She is also an exceptionally close friend of Miriam Margolyes, Joan Plowright, and Dame Judi Dench.

Tropes associated with her work