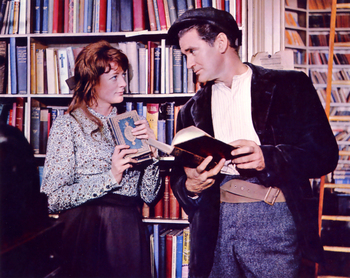 It is a fictionalized biography of the early life of Irish playwright Sean O'Casey, referred to as "Jack Cassidy". (In Real Life O'Casey was born "John Casey" before changing his name to the Gaelic form "Seán Ó Cathasaigh" and then splitting the difference as "Sean O'Casey".) The film begins in 1911 with Cassidy (Rod Taylor) working as a manual laborer by day (he is literally digging a ditch) while writing pamphlets on behalf of a labor union at night. He also is part of an anti-British militia unit and participates in military drills, but resigns due to disputes with leadership and thus misses the Easter Rising of 1916.

Cassidy falls in love with a spirited bookstore clerk named Nora. In the meantime, despite his lack of formal education, he becomes a rising star in the literary world, with his play The Shadow of a Gunman debuting in 1923. The climax of the film comes with the premiere of his controversial 1926 play The Plough and the Stars, which made him famous.

This film was originally supposed to be directed by John Ford but Ford fell ill and had to leave the production after two weeks (he only directed one more film before his death in 1973). It features two actresses who were both just hitting the big time in 1965: Julie Christie in a supporting role as Daisy Battles, a cheerful prostitute who enjoys a one-night stand with Cassidy, and Maggie Smith playing the female lead, Nora. Michael Redgrave appears as William Butler Yeats.