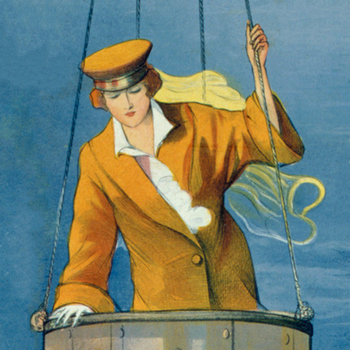 Filibus: Il misterioso pirata del cielo (Filibus: The Mysterious Pirate of the Skies) is a 1915 Italian silent film about a lady thief who operates out of an airship. The main character is Filibus, and her alter egos are the Baroness de Troixmonde and the Count de la Brive. Filibus flies around robbing banks and stealing jewelry. She is pursued by the famous detective Hardy, who is trying to find the identity of this mysterious bank robber. In an amazing scene of audacity, she (as the Baroness) tells him that he himself, Detective Hardy, is Filibus. By the film's climax, he starts to believe it.

Filibus didn't get much attention when it was first released, and World War I spread into Italy soon afterward, destroying the country's film industry. It's been gradually rediscovered in the twenty-first century, with numerous film festival engagements and a 2021 DVD/Blu-ray release from Milestone Films. (If your library or school subscribes to the Kanopy streaming service, you can even watch the restored release there.)