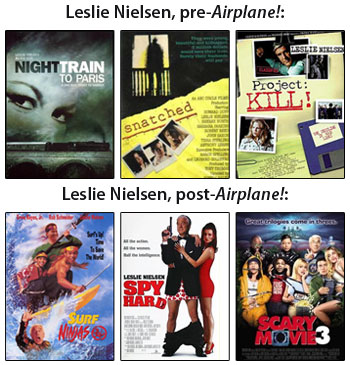 The casting opposite of Tom Hanks Syndrome. With this trope, a successful actor with a history of dramatic roles plays against type and stars in a comedy, playing it for laughs and generally acting silly. And it works. Unlike Tom Hanks Syndrome, the change will rarely be permanent: the actor will still dip into serious roles, and may even bounce back and forth from comedy to drama like a rubber ball. But sometimes, the actor finds a new niche (and a new career) as a comedic performer.

Named after actor Leslie Nielsen, who, after a long career in the fifties, sixties, and seventies as a dramatic lead, turned to comedy in the 80s and thereby rejuvenated his career to the point that, these days, more people know him for his work in Airplane! and Police Squad! than they do for any of his prior dramatic or romantic roles.

Often related to The Comically Serious. See also Playing Against Type. Note that this trope is not about serious performers who have done comedic work here and there. It is about people who once were well known for serious work, and now are primarily doing comedy. If the previous Typecasting is sufficiently exploited, Adam Westing may apply as well.