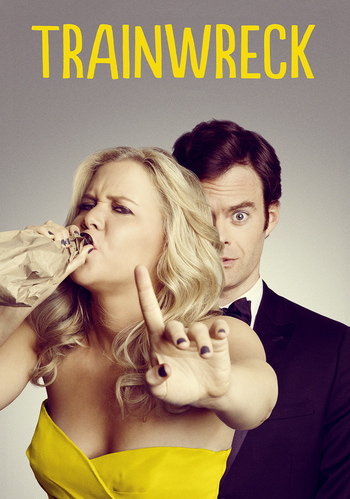 Trainwreck is a 2015 romantic comedy film produced and directed by Judd Apatow, written by and starring Amy Schumer.

Amy Townsend (Schumer) is a hard-drinking party girl in New York City, writing for a men's interest magazine headed by alpha bitch editor Dianna (Tilda Swinton). When she's assigned to write a profile on notable sports doctor Aaron Connors (Bill Hader) and falls into a romantic relationship with him, Amy's forced to choose between the noncommittal lifestyle imprinted on her as a child by her cynical father (Colin Quinn), or start settling down like her dutiful sister Kim (Brie Larson). Vanessa Bayer, John Cena, Ezra Miller, and LeBron James (Adam Westing as himself) also star.