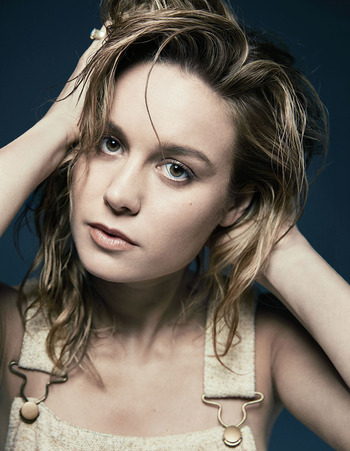 Brianne Sidonie Desaulniers, known professionally as Brie Larson (born October 1, 1989 in Sacramento, California), is an American actress, director, and singer. Larson took her stage name from both her Swedish great-grandmother and the American Girl character Kirsten Larson, whose doll Larson owned as a child.

Larson got her start in acting as a child, appearing in works like the short-lived Bob Saget sitcom Raising Dad, the Disney Channel Channel Original Movie Right on Track, and the 2004 teen comedy Sleepover. During that time, she also began a short-lived music career, eventually releasing a studio album titled Finally Out of P.E. in 2005 (one of the songs wound up being used in Barbie and the Magic of Pegasus). Larson would later admit as an adult to being disillusioned with both her music and acting careers at the time, because the roles she was given weren't the ones she really wanted and her recording company refused to let her control her image as a musician. She then quit and worked "normal" jobs before ultimately returning to acting in her late teens.

In 2009, Larson began starring in Showtime's United States of Tara as the title character's daughter Kate Gregson, for which she received positive attention over its three-season run. During this time, she also appeared in 2010's Scott Pilgrim vs. The World and 2012's 21 Jump Street film reboot.

Larson's critical (and commercial) prospects increased tenfold beginning with her role in the 2013 film Short Term 12, which garnered her much Oscar buzz in award circles. Though she was ultimately not nominated for her performance in that movie, her turn as Joy "Ma" Newsome in the 2015 adaptation of Emma Donoghue's novel Room earned her an Oscar for Best Actress. Outside of arthouse indies, Larson also appeared in mainstream fare like Trainwreck, Kong: Skull Island, and Don Jon.

In 2016, it was announced that Larson had been cast in the coveted role of Marvel Comics character Carol Danvers / Captain Marvel in the juggernaut film franchise Marvel Cinematic Universe. Her own dedicated solo film was released in 2019, and she reprised the role in Avengers: Endgame.

In addition to her acting career, Larson is also a director. Her feature film debut, Unicorn Store, premiered at the Toronto International Film Festival in 2017, and was officially released by Netflix in April 2019.

Her works provide examples of the following tropes: