The "I Love You" Stigma 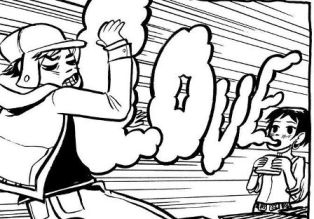 IT BURNS!
Robin: It's just, ["I love you"] is a big thing to say to someone, and I don't want to say it too soon.
Ted: What, you mean like I did?
Robin: No, I didn't— Yeah, like you did. I mean, you have to admit it, Ted, it was a little weird.
Ted: Weird or courageous?
Robin: Pretty sure weird. I mean, who gives it up on the first date?
Ted: C'mon, it shows I'm brave and bold, like a knight.
Robin: No, it shows that you're an "I love you" slut.
— How I Met Your Mother
Advertisement:

There is a danger in using the term "Love" when directed towards a person who is not your relative (and sometimes even then). When done properly and the feeling is reciprocated, it ends up as a Relationship Upgrade, but if handled badly or too soon, it can kill the relationship. Because of this, even couples already in an official relationship will sometimes be afraid of using any terms besides "like" or "care for".

In some instances, reaching the "I Love You" place is seen as point of no return, or at least an indication of a long term relationship. Ironically, sometimes declaring your love for someone ends up as a Moment Killer, not necessarily because the feelings aren't reciprocated but because the other person isn't ready for that commitment.

In contrast, The Casanova (and perhaps the Casanova Wannabe) tends to use this term so often that it completely loses meaning with them; should they become a Ladykiller in Love, they may not know how to articulate this brand new, profound feeling.

This depends on the language; a direct translation of "I love you" can be a stronger or weaker statement in other languages, and even in English the term can be used casually and in a wide variety of ways. A Woolseyism may be needed in translation to get the proper tone. note In French "aimer" means "like" as much as "love". Spanish has "Te quiero" and "Te amo", which both mean I Love You, but the later is MUCH more serious. "Te quiero" implies a more general, platonic love than "Te amo", and is used more typically between friends and family. In German the literal translation of "I love you" - Ich liebe dich - implies a romantic meaning much more than in English, while the phrase Ich hab dich lieb (English equivalent: "I have/feel love for you") is used to express love in the non-romantic sense, such as that between parents and their children. 我愛你 in Chinese is usually a serious declaration of romantic love - considered particularly formal in Cantonese. 我鍾意你 (Cantonese) and 我喜歡你 (Mandarin) are equivalents of "I like you", but a bit more romantic than English. Cantonese word for "kiss" (錫) can be used to as a protective, cutesy sense of romantic love, but is also often used as the familial love, especially of parents towards children, just to muddy the waters further. And even within the English-speaking world, dating works differently in different cultures.

Compare the Love Confession, Love You and Everybody, Commitment Issues, Cannot Spit It Out, and The Four Loves. The recipient (or the one who'd said it, but wishes to cover up) might use I "Uh" You, Too in response.

Contrast Platonic Declaration of Love, in which "love" is meant in an entirely platonic manner with no hint of romance attached.