I Got You a Drawer 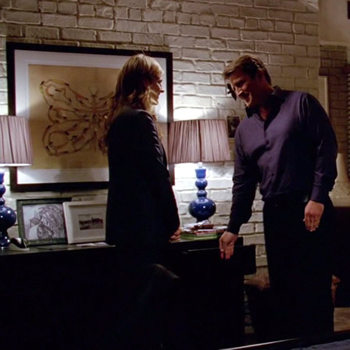 Poor dope thinks there's something in there for him.
Male Fish: I couldn't afford a present this year, so I got you this box.
Female Fish: That's what I got you!
— SpongeBob SquarePants, "Idiot Box"
Advertisement:

Sue knows that Bob is going to give her a present — a really romantic present. After hours (or days) of giddy anticipation and increasingly extravagant guesses, she arrives at Bob's apartment for the big moment. With a big smile, Bob walks over to his dresser and pulls out one of the drawers, but when Sue moves closer in to peer into the drawer it's completely and totally empty. The big gift was nothing? Is this some kind of joke? A cruel kiss-off?

Nope — Bob's gift is the drawer.

Used for showing the escalation of a relationship with characters who so far have been emotionally guarded or whose previous relationships have all been strictly casual, but who now want to show their lover that they're ready to let them into their lives. Often carries the implication of exclusivity, if it did not exist already. May also mark the slide from Friends with Benefits into an actual relationship.

It's a move with repercussions. Not only does offering a drawer allow Sue the practical expedient of leaving clothes at Bob's place indefinitely, but the gift of a drawer also carries symbolic resonance, since dresser drawers (especially the sock drawer) are not only for the keeping of one's most personal garments, but are also proverbially places where people stash away secret valuables and important mementos — a solid, protective, intimate space to store things of sentimental meaning. Plus, a drawer opens up — just like Bob is doing. Cute, huh?

The drawer can signify a shift into a long-term relationship. Leaving a toothbrush says the lover is sleeping over for the time being, but giving a drawer implies shared space and time and the prospect of a future together — and a permanent end to the walk of shame. On the flip side, could also mean that the carefully compartmentalized space of a dresser drawer is the only part of Bob's life he's ready to open up to Sue.

If the intimacy upgrade is unwanted, it might lead to the awkwardness of an unwanted gift.