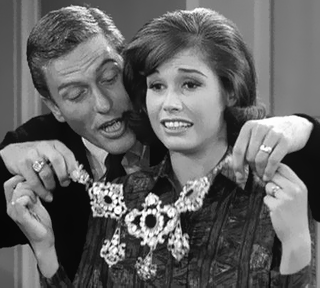 Most often a stock sitcom plot inherited from theatre (predominantly farce and pantomime) in which a character receives a present. Said present turns out to be absolutely hideous, in the wrong shape or size, impossible to maintain or clean, and/or have some other defect. Additionally, the recipient is forced to pretend that they just love it, so as not to hurt the presenter's feelings or otherwise disappoint them for whatever reason.

To add to the character's pain, the poor receiver of the gift turns out to either be just so good an actor, that the presenter insists that they wear it all the time, put it on display, paint the house to coordinate, etc. Or, the gifter is either simply being or pretending to be in Selective Obliviousness to the actual situation. All the while, the poor victim has to profess contentment with or love of this horrible Money Sink. Cue an increasingly miserable character, and thus is comedy and/or drama committed as they try either to get rid of it, come to terms with it or endeavour to find a magical third option that will bypass the whole dilemma.

If played more for the drama, you can find the trope tipping towards the classical White Elephant mode, wherein the present was given specifically to passive-aggressively troll or hurt the receiver in some way. If they're lucky, it's just a Trickster Mentor or some Gadfly friend trying to teach them to come clean with their feelings if it is done deliberately, however maliciously played. Unlucky examples, however, can involve the Villain of the piece proving themselves to be an effective pain in ways that can be anything from Poke the Poodle levels of "evil" to honest to badness Card Carrying Evil.

Very much Truth in Television, as every person with a very generous but senile/half-blind/out-of-touch grandmother can attest. Further, gift cards exist primarily to avert the trope.

Homemade Sweater from Hell is a Sub-Trope.

Sister Trope to Faked Gift Acceptance, where someone appears to be genuinely happy to get a gift but then throws it away or destroys it when no one's watching.