It Came from the Fridge 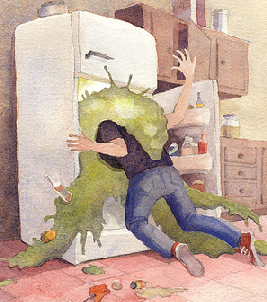 This, boys and girls, is why you clean the blasted fridge.
Image

Used with permission.
"There's something gross in the fridge today, It's green and growing hair.
It's been there since July!
If you can name the object in that baggie over there,
Then mister, you're a better man than I..."
— "Weird Al" Yankovic, "Livin' in the Fridge"
Advertisement:

Something hideous is lurking in the dark, eldritch depths of... your crisper drawer.

Interesting things breed in the depth of the refrigerator. Anyone who has ever had to clean one out can attest to that: foul-smelling, congealed mac 'n' cheese, shrivelled carrots and "furry" meat. The TV fridge, however, is another beast entirely. On TV, when life grows on your food, it is more than just life: it is sentient, multicellular and intelligent life. The back of your average comedy fridge is a breeding ground for all kinds of biological horrors — from oozing green slime to entire sapient races of leftover lasagna people to pasta-tentacled Eldritch Abominations. Creatures bred in the depths of an old Tupperware container make excellent Monster of the Week fodder.

Some shows may extend this trope to other flagrant displays of bad housekeeping, creating life from unwashed underwear and the dust under the bed. We honor them here as well. They obey the spirit of this trope, if not the letter. When the filth has conquered entire rooms or even the house itself, you have Trash of the Titans.

Subtrope of Creating Life Is Unforeseen. Contrast Empty Fridge, Empty Life. Unrelated to Fridge Horror. Not to be confused with It Came from the Sink.