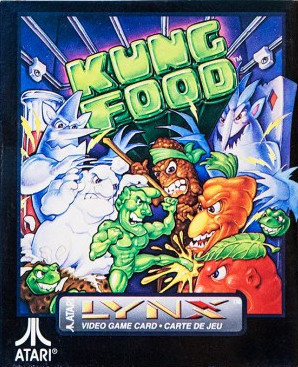 Kung Food is a Beat 'em Up video game for the Atari Lynx released in 1992. In it, you play as a researcher at the Top Secret Odnet Videogames Center. Thanks to experiments, you discover rynoleum, a compound that deforms all life it touches. You discover that Odnet plans to use rynoleum in the next game, risking potentially millions of lives. You decide to stop them by breaking in and taking the rynoleum home. Unfortunately, as the freezer door where the rynoleum was stored has been left ajar, it takes over you and turns you into a little green man. Now you have to beat 7 levels that all take place in your house while fighting the rogue food and getting to your goal in time.