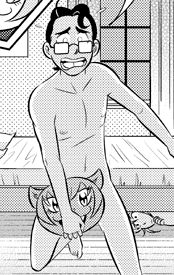 When a person covers up their nudity using their hands or an object. Unlike Scenery Censor, this is intentional on their part. Can be done with men or women.

Typically related to Sex for Product (advertisements claiming that the audience will be more attractive to members of their desired gender if they have the product), Public Exposure (a character who poses nude for painting or sculpture may be using something to cover themselves to keep the picture or sculpture tasteful), You Can Leave Your Hat On (a striptease can be prolonged by using hands to cover up exposed naughty bits), Reluctant Fanservice Girl (a character ends up in a state of undress against their will and will likely attempt to cover themselves depending on their extent of lacking clothes), Naked Freak-Out (a character freaked out by their nudity is likely to impulsively cover themselves with whatever they can grab hold of), and Naked People Are Funny (the nude character covering up their privates can help in the nudity being humorous).

See also Bankruptcy Barrel (a character wears a barrel because they lost their clothes or to show that they are poor), Godiva Hair (nudity covered up by the person's long hair), Modesty Bedsheet (when a naked character uses a bedsheet as cover, usually post-sex) Modesty Towel (when a naked character stays modest by wearing a towel around their body, usually after bathing), and Improvised Clothes (a character avoids going naked by making clothing from whatever they can find). Among photographers, the breast version is sometimes known as the "Arm bra" or "Hand bra".