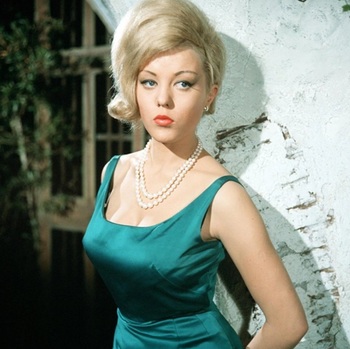 Born in Hampstead, London, Nolan initially studied to be a teacher, but playwright and actor Tom Kempinski, whom she was dating at the time and who was acting with the National Theatre, persuaded her to begin a career in acting. However, she ultimately began her career as a model, being briefly known as "Vicky Kennedy" during her glamour modelling career in the early 1960s.

She would revert to her birth name as soon as acting roles came her way, including A Hard Day's Night with The Beatles, as the Gambler Groupie who joins Paul's grandfather at a casino.note Leading to Paul's grandfather's infamous line, after looks at her ample cleavage, "I bet you're a great swimmer." In 1964, Nolan got the small role of Dink, Bond's masseuse, in the James Bond film Goldfinger. However, most memorably, she was also the woman painted gold that appeared in Robert Brownjohn's title sequence, advertisements and the soundtrack album's cover. Incidentally, one of Nolan's television roles around the time was appearing in one of the first episodes of The Saint with future Bond actor Roger Moore.

She was also best known in appearing in six films of the Carry On... Series. In the 1971 film Carry On at Your Convenience, composer Eric Rogers referenced Nolan's appearance in Goldfinger by using its three-note Leitmotif on a close-up of her. Nolan was given bigger roles in several 1970s Carry On films, most sizably in Carry On Girls, where there may have been another reference to Goldfinger when Nolan is wearing a silver bikini while she and Barbara Windsor are cat-fighting on a hotel floor.

She would retire from acting in the 1980s to take care of her family, after which she would begin a new career as a visual artist, producing photo-collages assembled from cut-outs of her early glamour modelling photographs, which were sometimes grotesque and deconstructed her sex symbol image. However, she would make a return to acting, when Edgar Wright cast her in his film Last Night in Soho, who would later describe her unique status of having appeared in a Beatles film, a James Bond film and in several Carry On films as making her "the middle of Venn diagram of everything cool in the 60's".

It would sadly end up being her last role, as Nolan passed away from cancer on 5 October 2020 at age 76.