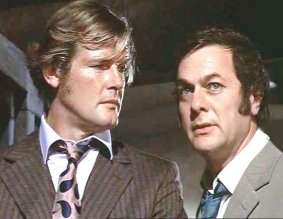 The Persuaders! is a 1971–72 ITV comedy/adventure series starring Tony Curtis and Roger Moore.

Lord Brett Sinclair, a British gentleman and aristocrat and Danny Wilde, a Nouveau Riche American Self-Made Man, are a pair of Brilliant, but Lazy playboys. Thanks to the machinations of ex-judge Fulton who wants to give their lives a new sense of purpose, they wind up as best friends and rivals who go on various adventures and take on criminal cases on an odd-job basis. Much of the humor of the series comes from the witty banter between the two characters as they constantly criticize each other's habits and lifestyle.

While the series did only moderately well on the home British/American market (which should not be too much of a surprise, considering that the main characters are based on their blatant national stereotypes) it has done significantly better abroad, and is widely remembered and cited in many European countries; most notable is its success in Germany, where the dialogues were rewritten more than they were translated, with much more Breaking the Fourth Wall and the likes, essentially making it into a different series entirely.

The Persuaders! provides examples of the following tropes: