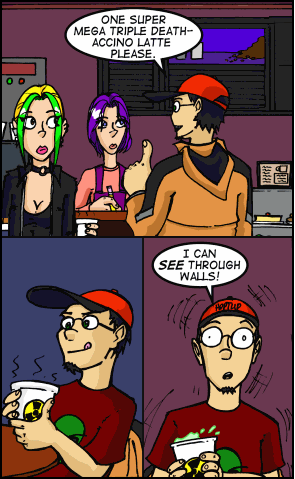 "Take one sip and you're awake for six hours. Two sips, you're awake for 72 hours. Drink the cup, you never blink in life."
— Dr. Cliff Huxtable, The Cosby Show, describing his med school coffee.
Advertisement:

While a Gargle Blaster will get you insanely drunk, Klatchian Coffee has the opposite effect. Rather than slowing down your brain, Klatchian Coffee speeds it up tremendously. In some cases, the results can be Nightmare Fuel in a cup, or just really scary to think about. Can generate Caffeine Bullet Time. May be used to demonstrate the level of a person's Must Have Caffeine addiction if Klatchian Coffee is their regular morning brew.

Possibly based on Turkish Coffee, which is an incredibly strong brew of coffee. Rather than drip or espresso it, you just almost-boil ultra-fine ground coffee grounds until you achieve drinkable coffee. (According to aficionados, bringing the water all the way to a boil will make the coffee unpleasantly bitter, while bringing it to the point where the water quivers without boiling just makes the flavor more intense.)

Compare Gargle Blaster for very strong alcoholic drinks. May overlap with Hideous Hangover Cure or Uncoffee. Will almost definitely overlap with Ate the Spoon. If it's powerfully bad coffee rather than simply powerful, it's Bad to the Last Drop.