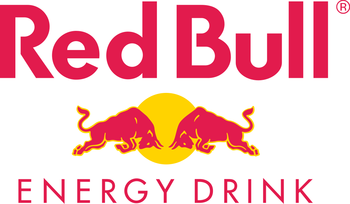 Probably the only energy drink brand with the most elaborate product placement campaign ever.
Red Bull is an Austrian energy drink brand sold since 1984. An offshoot of the earlier Thai brand Krating Daeng, Austrian entrepreneur Dietrich Mateschitz took a liking to Krating Daeng and partnered with its creator Chaleo Yoovidhya to adapt the formula and composition to Western tastes. While both companies are mistaken for each other, they are separate entities focusing on different markets.
Advertisement:

While the company is of course well known for its energy drink, its approach towards marketing the drink through cultivating a "brand myth" (read: plastering Red Bull logos everywhere in sports events by sponsoring teams and whatnot, as well as an emphasis on lifestyle news on its website and similarly-targeted magazines) effectively made it more of a media house that happened to be selling energy drinks than just a beverage company, something the likes of Monster Energy also tried to emulate with Ken Block and Valentino Rossi being a few of its most prominent endorsers. To this end, Red Bull has sponsored countless sports teams from football to Formula One to various World Rally Championship works crews (not to mention having established a couple or so racing teams themselves), and has even ventured into lifestyle magazines and luxury clothing of all things.

For the purposes of this website, this page focuses more on Red Bull as a media company. The company's slogan "Red Bull gives you wings" is also the Trope Namer for Power Gives You Wings.