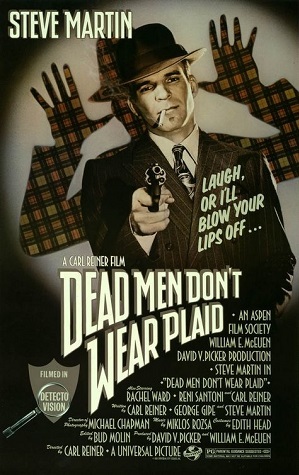 Dead Men Don't Wear Plaid is a 1982 parody of and homage to Film Noir. Its central joke is the use of Stock Footage from well-known '40s movies (mostly noirs, though the women's melodrama Humoresque somehow crept in) to construct editing gags in both visuals (skillful cutting, stand-ins, and identical sets and costumes bring modern actors into classic scenes) and dialogue (pre-existing lines are recontextualized to the point of bizarrerie).

It stars Steve Martin and Rachel Ward... and Ingrid Bergman, and Humphrey Bogart, and Ava Gardner, and Fred MacMurray, and so forth. And, when you think about it, was directed by Carl Reiner... and Delmer Daves, and Howard Hawks, and Alfred Hitchcock, and Robert Siodmak, and Billy Wilder, and so forth. The film had the luck of hiring veteran costumer Edith Head, who'd also done the costumes from most of the original films used. She passed shortly after, and the film is affectionately dedicated to her memory and to the people who worked on the films of the '40s and '50s. As a coincidence, it was also the last feature film of composer Miklós Rózsa, who partly wrote music for scenes he had already scored 40 years before...

Most of the old-footage interactions are one-shots with characters who do not return. This was probably due to the limited number of potentially funny scenes in each of the source films, rather than a deliberate choice, but it actually manages to replicate the episodic, loosely-plotted feel of some low-budget noirs.

The Bogart and Ava Gardner characters do appear several times throughout the story. The final section, set in a South American village, is more unified than the rest of the film because all of its pre-existing footage comes from one movie (The Bribe), creating a consistent visual style and allowing the three imported characters (played by Gardner, Charles Laughton, and Vincent Price) to refer to one another by name.

Many scenes in the film contain no old footage; these advance the plot, such as it is, but their broad humor is at odds with the subtler editing gags.