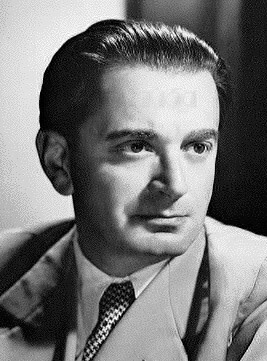 "You don’t decide to be a composer. You must have the inborn talent, plus a 100% urge to compose...Serious composing is the only art at which you cannot make a living. It’s a curse you’ll follow, though, even if you die of hunger."
Advertisement:

Miklós Rózsa (18 April 1907 – 27 July 1995) was a Hungarian-born American composer. Though his father wanted him to study chemistry, Rózsa's musical talents led him to the Conservatory in Leipzig, where he studied with such people as Hermann Grabner. Eventually he made his way to Paris, where he tried to make a living composing music, but found that he had to author a few popular tunes under the pseudonym Nic Tomay just to keep food on the table.

Working in Europe throughout the 1930s, Rózsa witnessed first-hand the darkening clouds of the political and military firestorm that would consume the continent. He returned to France, learning to write fanfares for the cinema, but when the contractors failed to deliver the promised funds, he decided to move to London. He studied choral conducting at the Trinity College of Music and eventually met a Hungarian compatriot, director and producer Alexander Korda, who greatly influenced his decision to write more formally for the cinema, and to relocate eventually to America, where he could continue to compose for both films and the concert hall.

Rózsa was delighted to be on American soil; his autobiographical recollections of life in America, a country he eventually made his own, are filled with humor and grace. By 1943, he had conducted his first Hollywood Bowl concert; five years later, he'd conduct the same orchestra behind the celebrated tenor Mario Lanza, who would also record a vocal version of Rózsa's Quo Vadis composition, "Lygia." Rózsa was none too thrilled with the superficial Hollywood lifestyle, however; anytime he visited New York City, by contrast, he felt like he was "coming back to civilization again."

It was in America that Rózsa's film scoring career took off. He was a serious composer who refused to bow to those critics who had panned film scoring because it provided a regular cash flow. Bach and Haydn worked for money, Rózsa argued, and many classical composers worked on the basis of commission.

In his lifetime, Rózsa scored about a hundred films. At the height of his career, while he was scoring 4, 5 or 6 films a year, he was also producing works for the concert stage. In 1953 alone, Rózsa did five film scores, including Julius Caesar, Knights of the Round Table, and Young Bess, while also working on his Violin Concerto (which made its debut three years later). He was among the very first film score composers to present an orchestral overture as a prelude to the actual film. His output stretched from monumental epics, where he emphasized historical accuracy, to the most intimate love themes. He matched the moods set by directors as varied as Alfred Hitchcock, William Wyler, Billy Wilder, Vincente Minnelli and Douglas Sirk.

Rózsa's scoring was marked by five distinct "periods": The first, Rózsa called the "oriental" period, with films featuring exotic locations (e.g. The Thief of Bagdad (1940), The Four Feathers, and The Jungle Book); the second featured his "psychological" portraits (e.g., The Lost Weekend, The Red House, and the Oscar-winning score for Spellbound); the third was his "film noir" period (e.g., Double Indemnity and his Oscar-winning score for A Double Life); the fourth was his Historico-Biblical Period (e.g., Madame Bovary, Quo Vadis, El Cid, Lust for Life (a Bio Pic of Vincent van Gogh), and his Oscar-winning score for the 1959 adaptation of Ben-Hur); and the fifth was his sci-fi phase (e.g., The Power (notable for its use of the Hungarian cembalo) and Time After Time).

When Rózsa turned 80, he was given a touching tribute by colleagues and friends; even world leaders such as Ronald Reagan, Margaret Thatcher and the Pope sent him congratulations. Los Angeles Mayor Tom Bradley dubbed the composer's birthday, April 18, 1987, "Miklós Rózsa Day."