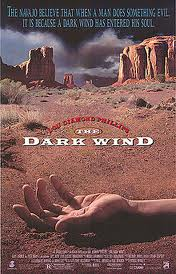 "The Navajo believe that when a man does something evil, it is because dark wind has entered his soul."
Advertisement:

The Dark Wind is an American mystery film made in 1991, directed by Errol Morris (The Thin Blue Line) and adapted from the Leaphorn & Chee novel of the same name by Tony Hillerman.

It is set on the Native American reservation shared by the Navajo and Hopi tribes, with tensions simmering between them. The main character, Jim Chee (Lou Diamond Phillips), is a Navajo police officer who has been transferred there a week earlier. Initially, he's sent to investigate the mundane case of vandalism at the local water pump, but things soon take a turn for the worse when a body is found killed in accordance to Navajo's "skinwalker" fashion. Soon, there's also a suspicious fatal crash of a small plane, whose pilot was a known drug-runner. It is up to Jim Chee to unravel the mess and find the bigger picture.