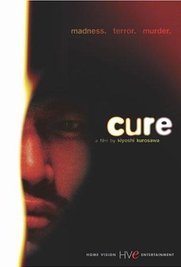 Cure is a 1997 Japanese horror film written and directed by Kiyoshi Kurosawa.

A series of brutal murders start happening all over the Tokyo area. All are committed by different, unrelated people, but there are two connections: All the victims have an x-shaped wound on their throats, and none of the killers can remember committing the crime. A detective investigating the case comes across a mysterious amnesiac who seems to be near every crime...