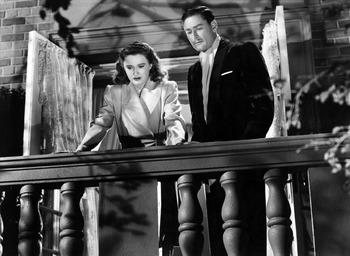 Cry Wolf is a 1947 mystery/thriller film directed by Peter Godfrey, adapted from the novel of the same name by Marjorie Carlton.

Sandra Marshall (Barbara Stanwyck) is brought to the mansion of the wealthy Caldwell family one evening. She's brought in to see family patriarch Mark Caldwell (Errol Flynn) who tells her that this is not a good time for guests as the family is in mourning, one day before the burial of Mark's nephew, Jim Demarest. Sandra says she knows this...because she is Jim's wife.

Mark is caught by surprise by this news; Sandra responds by saying she hadn't been in touch with her husband recently and hadn't heard about her husband's death until she read it in the newspaper. Sandra freely admits that hers was a marriage of convenience: the terms of Jim's mother's will left his $2 million inheritance in trust until Jim got married. They would have gotten divorced in a month after Jim got his money, but now Jim is dead.

Sandra is suspicious about the sudden and vaguely explained death of a young man barely a month before Mark would have had to give him two million dollars. She grows more suspicious when Jim's little sister Julie, who seems to be a semi-prisoner in the mansion, tells Sandra that Mark once before intervened to stop Jim from getting married, and is currently trying to stop Julie from getting married to her boyfriend. Then things start getting really weird when Sandra hears screaming from Mark the chemist's laboratory, in the other wing of the mansion...