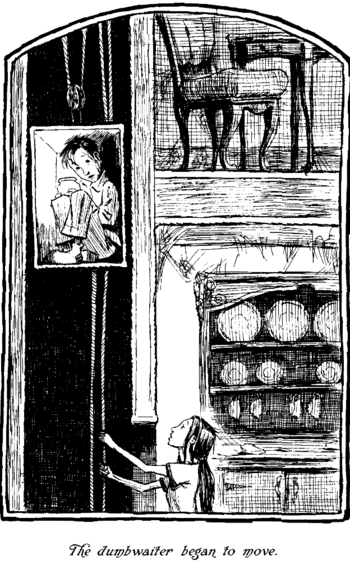 "It was a dumbwaiter. No, I am not being rude about some poor old waiter—a dumbwaiter is a kind of elevator. I knew that because there used to be one just like it in the first-kitchen-on-the-right-just-past-the-laundry-room, and that is what Aunt Tabby used to call it. I remember one rainy day I was so bored and I got inside the elevator and hauled myself up to the dining room. It was the best fun ever, and I spent all afternoon going up and down until Aunt Tabby caught me."
— Angie Sage, Araminta Spookie: My Haunted House
Advertisement:

The dumbwaiter has been a fixture in Big, Fancy Houses for over a thousand years

. A miniature elevator between the walls, it is designed for transporting food, laundry, and other objects between floors in a building when carrying them would be inconvenient. What it's not designed for is carrying people.

And yet, something about this small, mobile space is irresistible to characters in fiction. Maybe you're a curious youngster exploring the old mansion your family just moved into, maybe you're escaping from an enemy and there aren't any air ducts nearby, or maybe you just saw what looked like a tiny elevator and thought, "Hey, I bet I could fit in that thing!". Whatever the reason, you're contributing to the universal law that whenever a dumbwaiter appears in fiction, no matter its size, someone will take a ride in it.

Most modern dumbwaiters are motorized, but the ones appearing in fiction can usually be operated from within by pulling on a rope to hoist oneself up. Often Justified by the character taking the ride being a child who is just barely small enough to fit inside. A Scare Dare may be involved, as these spaces (beyond being potentially dangerous, especially in old buildings) can easily induce Claustrophobia. Expect Cobwebs of Disuse.

Definitely do not try this one at home—as noted, dumbwaiters are not built for people.

Subtrope of Secret Path; Sister trope to Air-Vent Passageway, Chimney Entry, and Secret Underground Passage. Will often lead to a Secret Room in an Old, Dark House, Cool House, Haunted House, or Big Labyrinthine Building. Can often be used for an unconventional Elevator Escape. Unsurprisingly, it's easier to hit a Maximum Capacity Overload and cause Elevator Failure in one of these than in a full-size lift. Compare Mobile Maze. See also Artistic License – Engineering.

Dummy in the Dumbwaiter

Dummy in the Dumbwaiter