Our Kelpies Are Different 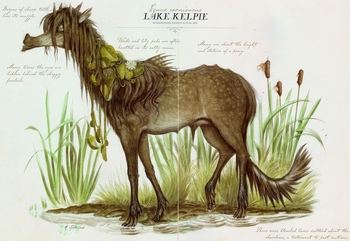 In Scottish mythology, the kelpie is a shape-shifting spirit that inhabits lakes and lochs. Its true form is a horse-like creature, but it can take on human form, as well. A story centering around this creature is a cautionary tale about the dangers of large bodies of water; people who ride on a kelpie are carried into the water and drown. Some modern depictions of the kelpie are Lighter and Softer, and instead portray them as horses with water powers.

Compare Our Hippocamps Are Different for a different kind of water horse, Nuckelavee for another deadly horse-like aquatic creature from Orcadian mythology, and Selkies and Wereseals for another deadly aquatic shapeshifter from Scottish lore. Also see Stock Ness Monster for another famous resident of the Scottish lochs, and one who is often linked to the kelpie folklore.

A Kelpie appears to bring Kratos, Freya and Mimir to the Norns.

A Kelpie appears to bring Kratos, Freya and Mimir to the Norns.