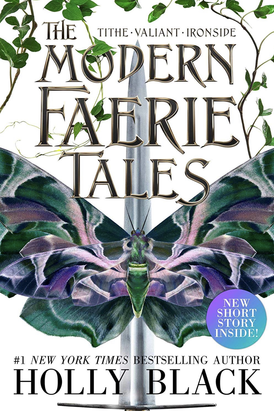 The Modern Faerie Tales is an Urban Fantasy trilogy by Holly Black, including the books Tithe, Valiant and Ironside.

Tithe (2002) begins with Kaye Fierch returning to her childhood home of New Jersey after her rocker mother's boyfriend attempts to stab her mother after a gig. Once home, Kaye tries to reconnect with some of her old childhood friends—including some of her "imaginary" ones, a trio of faeries. While she's no stranger to the Fair Folk, she stumbles into the dangerous faerie courts when she meets a completely different faerie, Roiben, a knight from the Unseelie Court.

Valiant (2005) introduces a new protagonist: the Tomboy runaway Valerie Russell. She runs to New York and gets caught up with teen vagrants Lolli, Dave, and Luis. Her new friends are hardly normal, and are in fact couriers to a fae named Ravus, a troll that literally lives under a bridge and who makes a special drug for the exiled fae that eases the iron sickness.

Ironside (2007) is a sequel to Tithe, and returns to Kaye as the protagonist. Roiben is soon to be crowned King of the Unseelie Court. Kaye drunkenly swears her love to Roiben during his coronation, and is consequently forbidden from seeing him until she finds the impossible: a faerie who can tell a lie. At the same time, guilt from being a changeling causes her to expose the truth to her mother and find her mother's true child, somewhere in the Seelie Courts. While there, she gets caught up in the Seelie Queen's plans to take over the Unseelie Court, and must find a way to save both herself and Roiben.

All three books were republished as an omnibus in 2019. Additional short stories with the characters and setting are:

The Darkest Part of the Forest is set in the same universe, as is The Folk of the Air.

is a short crossover between Modern Faerie Tales and The Shadowhunter Chronicles, written by the authors of both series for a charity event.