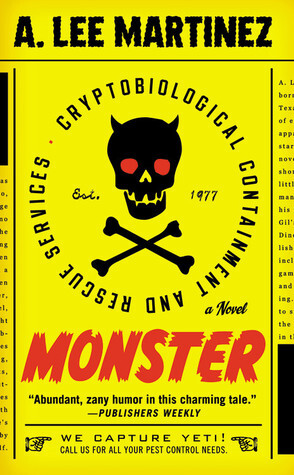 Monster Dionysus's life sucks. He's got a dead-end job which he absolutely hates, a nagging Tsundere girlfriend from hell, can barely afford the roof over his head, and worse yet he has to face the inevitable prospect that one day he'll be completely out of a job.

Wait, did we mention that his job was capturing and retrieving cryptozoological creatures? Because if not, it's really important that we do...

Things get worse for Monster when he meets Judy on the job when the convenience store she works at is attacked by yetis. Though she's a light cog and therefore physically incapable of understanding The Masquerade, she still makes a point of intruding on Monster's life. And let's face it, after her workplace is wrecked by yetis, and her home is destroyed by a bunch of trolls and a kojin, there's really nothing else you can do.

However, whenever Monster and Judy meet, cryptozoological creatures seem to follow to the point where it's impossible to not notice. Before long it is revealed that Judy isn't quite what she appears to be, and it's up to her, Monster, and Monster's paper gnome Chester to stop an evil that has existed since the beginning of the universe. In fact it's the reason the universe even exists.

Oh, and his girlfriend from hell? Yeah, she really is from hell.

This covers the book written by A. Lee Martinez. Not to be confused with the manga or the film by the same title. Or the 1999 young adult novel Monster. Or the similarly titled short story by A. E. van Vogt.