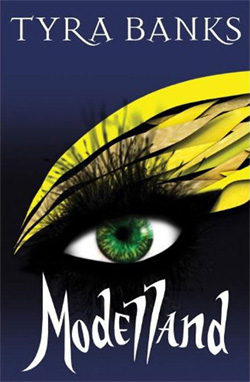 "You want to be chosen. You know you do. Don't lie, dahling [sic]. You lust to go to Modelland to become one of the only famous people in the world..."
Advertisement:

Modelland note pronounced exactly how it looks is a Young Adult novel written by former supermodel and America's Next Top Model host Tyra Banks. It was meant to be the first part of a series, but no sequels ever materialized. It's notable in that it's one of the few celebrity book projects that (according to Word of God) doesn't have a ghost writer involved. It is a cross between The Hunger Games, Harry Potter, and America's Next Top Model.

Tookie De La Crème isn't what you would call a conventional beauty: Her forehead is big, her hair is ratty, her body is gawky, and her eyes are two different colors. So naturally, she didn't expect to be picked to attend Modelland, an exclusive school on top of the world mountain where the magical Intoxibellas, women who are a cross between a modern day supermodel and a sorcerer, are trained. It's an opportunity that every other girl in the world would kill for, and somehow, she and three other awkward looking girls have ended up there.

Tropes that Modelland provides an example of: