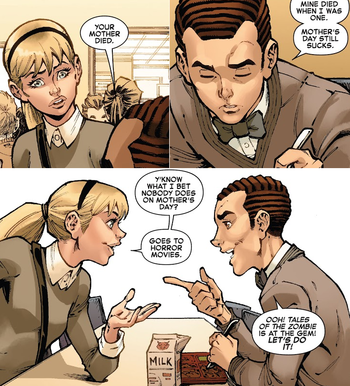 "Was your mother's name Martha, by any chance?"
Frank: I never like it when people tell me, "Sorry about your mom."
Leo: It never feels genuine.
Frank: But I'm sorry about your mom.
Leo: Thanks.
— The Heroes of Olympus, "The Mark of Athena"

Often, the "bonding" part of this trope is done in a scene designed to stir up some emotion, with the two characters alone together, maybe sitting on a hillside or something, and something in the conversation leads them to talk about their parents.

Variations of this can cover any missing relative, or anyone who is sufficiently close enough to a character that they consider each other family. A relatively common twist on this trope is a revelation that the two characters are missing the same exact person. (e.g., Luke and Leia learning that they are brother and sister.)

A Sub-Trope of Commonality Connection.

Jerome and Joy both realize they have similar parental issues, leading to a sweet moment.

Jerome and Joy both realize they have similar parental issues, leading to a sweet moment.