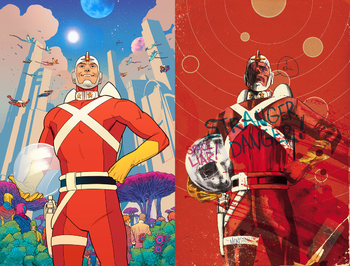 Amazing Science Fiction(?)
"Our lives are our stories. Little fictions we tell our friends and our lovers and ourselves. And we spend every moment we have praying to God we can find... that no one ever discovers we made all that #$#@ up."
—Alanna
Advertisement:

Strange Adventures is a 12-issue miniseries by Tom King (Batman (Tom King), Mister Miracle (2017)), Mitch Gerads, and Evan "Doc" Shaner as a part of the DC Black Label imprint. While King and Gerads' previous collaboration focused on the New Gods, this is a look into another one of DC's space heroes: Adam Strange.

Adam Strange is a man of two worlds: Earth and the alien planet Rann.

With the constant conundrum of being warped back and forth between the two planets due to the fickle Zeta-Beam and most recently partaking in an alien war on Rann with the Pykkts, the life of Adam is hardly one of dull moments...or so it was.

Adam has recently retired to Earth with his beloved wife Alanna, where he has written a memoir of his escapades on Rann and is on tour to promote it while signing copies. But the good times come to a screeching halt when a man angrily confronts Adam over what happened on Rann. To make matters worse, that same man is later found murdered not long after by a space gun.

For sure, Adam is positive he didn't kill the man. But it still begs the question: if he didn't pull the trigger, who did? Exactly what happened on Rann? Is Adam Strange a war hero or a war criminal?

Only Mister Terrific can figure out the truth...but what he finds out may hit more than a few nerves with Adam and Alanna.