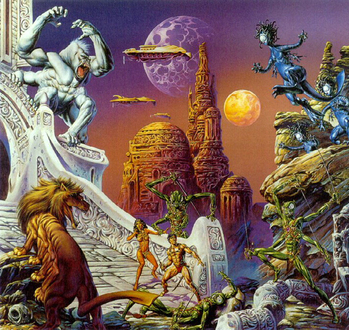 "I wanted to write about imaginary worlds. Now that our whole planet has been explored other planets are the only place you can put them."
— C. S. Lewis, A Reply to Professor Haldane.
Advertisement:

Stories, nominally Science Fiction, set on an alien world described in lush detail. The world can be Earth in the far distant future, or an alien planet, but it is reached by science-fictional means, not magic.

However, the science is largely handwaving. Visitors may arrive on the world by spaceship, and there might be items of Lost Technology present, but overall the world will feel like Low Fantasy — a feudal society with small-scale magic but no Big Bad — and it will share most of the same tropes. Sometimes the genre is even called "Sword and Planet", in reference to Sword and Sorcery, although other authors have this as a different if often overlapping genre. Because the "romance" in the title stems from Chivalric Romance, a Love Interest is not in fact required.

May involve Weird Science. Schizo Tech may occur. Even if the planet has futuristic transportation, expect, however irrationally, large parts of it to be unexplored, and it to be easy to be out of contact with one's home (and government). Prone to use Medieval European Fantasy tropes, or feature a Feudal Future. Overlaps heavily with the Dying Earth subgenre pioneered by Jack Vance's eponymous novel. Examples set in our solar system tend to involve now-discarded hypotheses about the environments and histories of other planets, such as Venus Is Wet and Once-Green Mars.

Space Opera is a closely related genre, but the action and adventure tend to take place more in space and on differing planets. Usually it is set within the context of a galaxy-spanning civilization and involves at least some travel between planets. One distinction is that Planetary Romances are essentially Jungle Operas in space whereas Space Operas are essentially Sea Stories in space.

Not to be confused with Mars Needs Women.