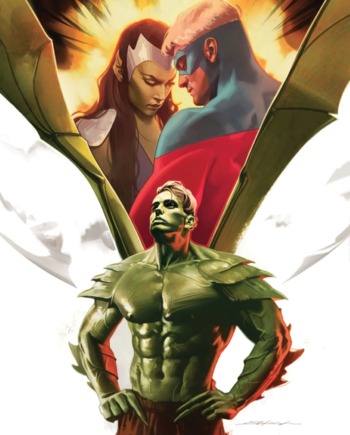 Half Kree, half Skrull, all hero!
"You will always be a child of two worlds. I am grateful for this, and for you."
— Sarek (to Spock), Star Trek (2009)
Advertisement:

There are two separate, perhaps opposing, communities. There is an individual who somehow claims membership in both communities. This could be because:

This gives the character a dual identity. It may be that he sees himself as a member of both communities, or he may identify more strongly with one community but potentially claim/be claimed by the other.

There are various effects this can have on the character:

The case of total rejection is a common origin of a Hunter of His Own Kind, especially when one half is Always Chaotic Evil or there are deeper issues with one parent, but isn't exclusive to this situation. For instance, a Proud Scholar Race Guy character raised by adoptive Proud Warrior Race parents may seek to prove themselves by becoming the most ruthless and violent warrior of the tribe.

Note also that this trope is about people who have dual identities due to accidents of birth or circumstance. Someone who chooses to join a community in order to enhance their diplomatic credentials would not qualify.

Often Nature vs. Nurture debates (whether in-universe or not) will come into play. May also overlap with Child of Forbidden Love.

Compare Mighty Whitey and Going Native, Half-Breed Discrimination, and Hybrid All Along. See also Wainscot Society. "Rediscovering Roots" Trip is when the child travels to one "world" to connect with their heritage.