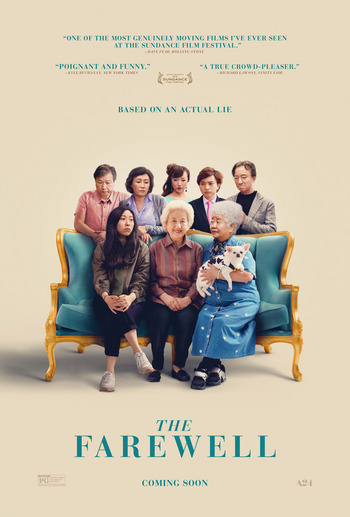 "Chinese people have a saying: 'When people get cancer, they die. It's not cancer that kills them, it's the fear'."
—Lu Jian
Advertisement:

The Farewell is a 2019 dramedy written and directed by Lulu Wang, based off of a real incident in her life that she first publicly discussed in her radio story What You Don't Know, later adapted into part of an episode of This American Life.

The film stars Awkwafina as Billi, a Chinese-American aspiring writer who gets the news that her grandma ("Nai Nai," Chinese for "father's mother") is dying of lung cancer. However, she also learns that her Nai Nai doesn't know she has cancer; the family has decided to keep the news secret from her to let her live her last days in peace. On top of that, they've organized a wedding in China between Billi's cousin Hao Hao and his girlfriend Aiko in order to allow everyone to see Nai Nai one last time.

What follows is a series of misunderstandings and Dramatic Ironies as Billi heads to China and grapples with the moral weight of the family's lie.

The Farewell contains examples of: