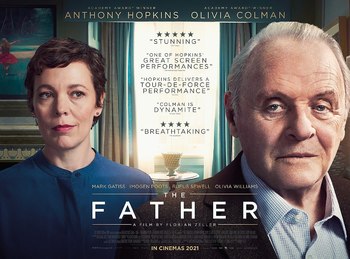 The Father is a 2020 drama directed by Florian Zeller and written by him and Christopher Hampton, based on Zeller's 2012 play Le Père. The film stars Anthony Hopkins and Olivia Colman, with Rufus Sewell, Imogen Poots, Olivia Williams, and Mark Gatiss in supporting roles. It premiered at the 2020 Sundance Film Festival ahead of a general release on February 26, 2021.

Anthony is an 80-year-old Welshman. Active, mischievous, and charming, he insists he is perfectly capable of living alone despite his age. However, his daughter Anne, unable to visit every day, insists on hiring in-home care. As Anthony tries to rebel against this imposition, he notices that the world around him increasingly appears to not be as it seems. Even the flat where he has lived for decades isn't staying the same, and the people and things inside keep changing. It becomes clear that Anthony has a severe case of dementia, one that leaves him unable to distinguish between individuals, or between the present and the past.

. Compare Henry, a 2011 short film with a similar premise.

Tropes associated with The Father include: