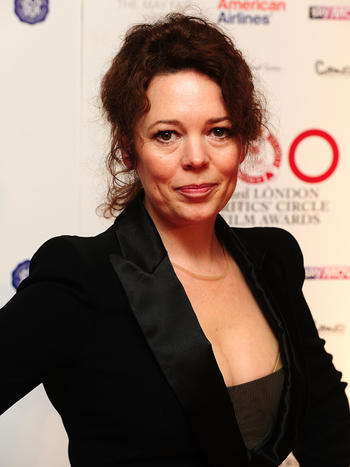 I'm usually in everything.
"This is hilarious! I've got an Oscar."
—Colman's reaction to getting the Best Actress Oscar in 2019.
Advertisement:

Born in Norwich, England on 30 January 1974, Sarah Caroline Colman CBE decided to become a professional actor after studying drama at Gresham School and starring in a school production of The Prime of Miss Jean Brodie. She joined Footlights at Cambridge University, where she met David Mitchell, Robert Webb, and Peter Serafinowicz. Performing as Olivia Colman, she appeared in a few shows before being noticed for her role as Sophie Chapman in Peep Show.

Since then, Olivia Colman has become a highly-prolific performer in both TV and movies (to the point where people joke/complain that she's in everything they see) and is becoming increasingly known outside Britain. She's earned earned several awards, namely a BAFTA TV Best Actress Award for her role in Broadchurch and a BAFTA, Golden Globe, and Oscar for playing Queen Anne in The Favourite. After some more high-profile roles, audiences have come to admire her ability to balance comic and extremely serious roles.