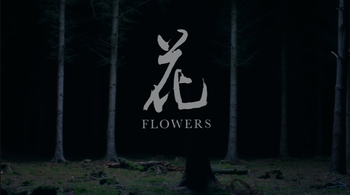 Flowers is a Channel 4 Dark Comedy Drama show about the Flowers, an anti-social family living somewhere in rural England called Heathen's Wood and just being weird. They are the overbearing but still somehow wet cloth of a mother Deborah (Olivia Colman), depressed and bored father Maurice (Julian Barratt), adult twins the slightly-satanic Amy (Sophia Di Martino) and mad-inventor Donald (Daniel Rigby) who have had to grow up in this mess, still live at home and are seen barely functioning outside as Donald tries to woo neighbour Abigail (Georgina Campbell) and Amy barely leaves her room, instead writing creepy songs (and more successfully wooing Abigail).

The series was written and directed by Will Sharpe, who also stars as the Japanese Shun, a family friend and Maurice's illustrator for his books.

The first series premiered in spring 2016, the second in summer 2018, with six episodes each. It is a comedy, but also a kind of romance between characters and mental illness — most specifically Maurice's "major depressive disorder" (depression), but implicitly others through Amy.

The second series is after an unspecified Time Skip, by which point both Maurice and Amy have cut their unruly hair, Donald has let his grow, Maurice is on medication and Amy's in a successful band. These are the most massive changes to the status quo, but Donald has taken on a day job, too. It also features Donald's on-off Love Interest "Fat" Matilda (Helen Cripps), and a bunch of Amy's multicultural bandmates.