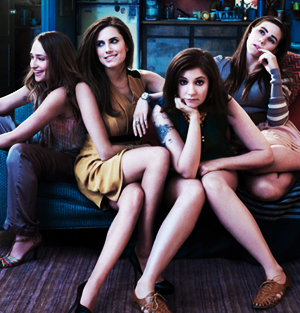 So many girls in here, where do I begin?
"I think I might be the voice of my generation. Or at least a voice of a generation."
Advertisement:

That other HBO series starring a Four-Girl Ensemble living in New York City, Girls is a dramedy co-produced (with Judd Apatow), written by, and starring Lena Dunham which follows the lives of four young women transitioning into full-blown adulthood. The show ran for six seasons from 2012 to 2017.

The titular girls are:

Supporting characters include Adam Sackler (Adam Driver), an awkward carpenter and actor; Ray Plochansky (Alex Karpovsky), manager of a coffee shop and about ten years older than the rest of the cast; Elijah Krantz (Andrew Rannells), whose Last Het Romance was with Hannah; and Tad and Loreen Horvath (Peter Scolari and Becky Ann Baker), Hannah's long-suffering parents. Cast Calculus being what it is, basically every character except Hannah's parents has had a flirtation with at least two of the girls. (Yes, even Elijah.)

The show's tone is difficult to encapsulate, engendering a polarizing response. It relies on Cringe Comedy and tongue-in-cheek humor, portraying its characters as immature, flawed and often deeply selfish—Designated Heroes, in short, who may be lovable but are not necessarily likable. The show also catches flak for being almost comically hipsterish, privileged, white, and New York-centric. Critics, however, have come down pretty strongly on the "Love It" side; the show's won a number of "Best Comedy" and "Best Performance" Golden Globes and Emmys, as well as a "Best Comedy Director" for Dunham from the Directors' Guild of America—the first time a woman has ever won that award.