Series / The Flipside of Dominick Hide 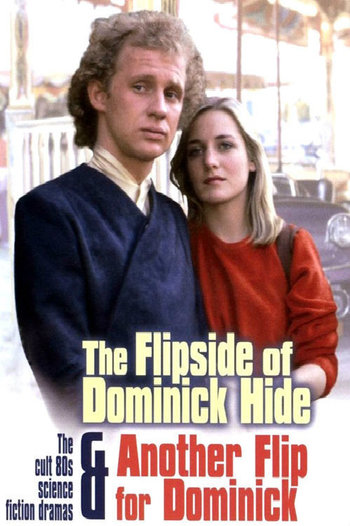 The Flipside of Dominick Hide is a BBC mini-series from the early 1980s, comprising two 90-minute Made For TV Movies (The Flipside of Dominick Hide and Another Flip For Dominick). The setting is a very bland, possibly dystopian future.note Things aren't coming to ruin, but living conditions during this future are more depressing than our present. Time Travel is possible, and used as a tool to investigate "The Flipside". Dominick Hide is a "Corro", one who records the past. In this case, he is a Corro for London, early 1980s. One day, he decides to land his flying-saucer shaped time travel device and go off on foot, something utterly forbidden, searching for his great-great-great-grandfather who is alive in that time. Dominick is utterly taken aback by the vibrancy of the age, compared to the sanitized and automated time he comes from.

The sequel, Another Flip for Dominick, begins with Dominick having been Kicked Upstairs after the end of Flipside, but discovering that another Corro has decided to emulate Dominick's own feat. This time, however, things are not going to end well.

A minor bit of trivia is that the conclusion of Flipside also had one of the first depictions of gay marriage on British television, albeit as just a throwaway line.