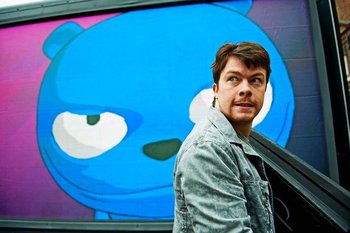 A cartoon bear that changed the world.
"Look we — we don't need politicians, we've all got iPhones and computers, right? So any decision that has to be made, any policy, we just put it online. Let the people vote — thumbs up, thumbs down, the majority wins. That's a democracy. That's a — that's an actual democracy."
— Jack
Advertisement:

Following great public popularity, comedian Jamie Salter is requested to contest a by-election in the riding of Stentonford and Hersham as Waldo, the fictional animated character he plays. As if several parties being outraged (who consider it unfunny and facetious) wasn't enough, the animator soon finds himself being used to ridiculous lengths and things start to get out of hand. Trailer here.

Stars Daniel Rigby as Jamie and Chloe Pirrie as Gwendolyn.

Tropes related to The Waldo Moment: