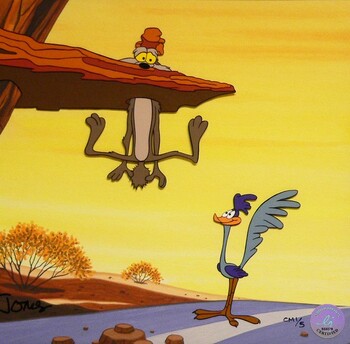 One of the rules is that we do have to remain sympathetic towards poor Wile E. Coyote, but can't we all agree that the Road Runner was always presented as an Invincible Hero?
Nella: Hi! I was sent from BFF Inc.
Nostalgia Chick: Best....friend....?
Nella: No, no. "Big Fat Friend." Here's my card.
Chick: [reading] "Making you look good since 1985™."
— The Nostalgia Chick, "My BFF"

Sometimes, the easiest way to show how awesome and cool a character is is to surround them with others who simply aren't as awesome. Hence, the Straw Loser — a character whose main purpose in the plot is to not be "with it", thereby making it all the more obvious just how cool the main character is.

Most kinds of media have been known to use the Straw Loser at one point or another, but the character type tends to be most common in media which appeal to the Lowest Common Denominator. The Straw Loser is an especially effective way of making sure that the audience understands who the good guy is in commercials - when you only have half a minute to make a sales pitch, it helps to make sure that the viewer understands how lame the opposition is.

Long-form media can fall to this, too. A character who may have started off as a mild loser can become a Straw Loser given enough Flanderization. In extreme cases, this can lead to Misaimed Fandom when the audience winds up sympathising with the Straw Loser — or, at least, thinks of the "cool guy" as "too cool for them". This is also a common cause of Strawman Has a Point. Sometimes this character will turn up even when the hero or heroes are perfect and thus the addition of a Straw Loser is superfluous; it's as if the creators feel the audience deserves a Hate Sink.

Sometimes a Straw Loser must be included, even if there is no need to make another character look cool, or the premise simply won't work. Usually it's to make absolutely sure that no one in the audience ends up sympathizing with the loser character. After all, it's much easier to root for a character who's marginally competent and might be able to pull off a victory under the right circumstances, than for an overwhelmingly pathetic character who will never, ever succeed barring some kind of Reality-Breaking Paradox. And in the case of a David Versus Goliath battle, often the only possible way to get away with having Goliath win is to make the entire contest extremely one-sided to the point of absurdity. Unfortunately, even this can backfire.

The Straw Loser is usually a Take That! against whatever group is "uncool". The viewer must tacitly understand and agree with the characterization of the Straw Loser in order for it to have any effect. As part of this, whatever the group is known to oppose or be worried about is likely to be depicted as a Windmill, making their efforts something to pity or laugh at.

Has a great deal of crossover with the other categories in The War on Straw, as it makes it especially clear which side is the one that's supposed to be made of straw. It is pretty much the opposite of Overshadowed by Awesome where a character appears as less impressive despite being definitely above average because he is unfavorably compared to true supermen.

Subtrope of Foil. See also Unlucky Everydude, This Loser Is You (just not you-you) and Expectation Lowerer. As noted above about acceptable targets, often crosses over with Token White; contrast the Unfazed Everyman.