Advertising / Get a Mac 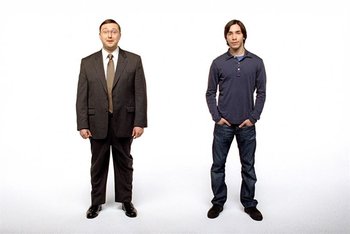 And I'm a caption.
Hello, I'm a Mac.
Advertisement:

The Get a Mac campaign, popularly known as the "I'm a Mac/I'm a PC" ads, was a television advertising campaign created for Apple Inc that ran from 2006 to 2009.

It was easily recognizeable because of the standard template of two men on an all-white background, representing the two home computing options.

The Mac, portrayed by actor Justin Long in the original North American campaign, was presented as a more versatile and secure option for home computing.

...while the PC, portrayed by author and humorist John Hodgman in the North American campaign (and co-wrote most of the commercials), was presented as very outdated, boring, and overly concerned with work.

Early commercials in the campaign offered a general comparison between the two, while the later ones focused on the security and user-friendliness problems of Windows Vista and Windows 7.

In addition to the North American television campaign, several advertisements have been shown exclusively as Flash web ads on various websites. Because they reference specific online advertising features, these have not been posted alongside their television counterparts on Apple's website.

Similar campaigns have been adapted for the British market, recasting PC and Mac with Mitchell and Webb respectively, and the Japanese market, featuring The Rahmens.

Hodgman and Long also appeared in videos during Steve Jobs's keynote addresses at the 2006, 2007, and 2009 Worldwide Developers Conference and the 2008 Macworld Expo. Hodgman also returned in a Call-Back to the campaign at the very end of the Mac-focused November 2020 event.

This ad campaign contains examples of the following tropes:

And I'm a stinger.