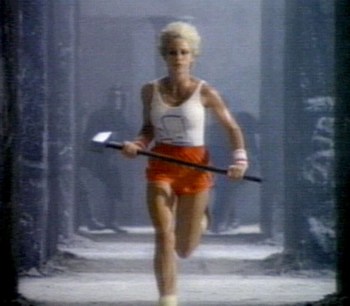 The iconic commercial that announced the introduction of the Apple Macintosh in 1984. It aired only twice, once in the very last minutes of 1983 on an out-of-the-way local station in Idaho so that it would qualify for 1983 advertising awards, and the second time during the telecast of Super Bowl XVIII on January 22, 1984. Directed by Ridley Scott, fresh off of Blade Runner, the commercial has been cited as the turning point for Super Bowl commercials.
Advertisement:

In case you're too lazy to watch a one-minute ad

, the commercial depicts a Dystopian universe in which an army of bald drones are marching into a hall where a man on a giant screen, generally understood to be Big Brother, is praising them for their conformity of thought. Meanwhile, a young athletic woman runs into the room, pursued by the apparent Secret Police, and throws a hammer at the screen. The screen explodes and an announcer says, "On January 24th, Apple Computer will introduce Macintosh. And you'll see why 1984 won't be like 1984."

If you're wondering how the hell this is an ad for a computer, Steve Jobs put it this way

during the Fall 1983 Apple Keynote: "It is now 1984. It appears IBM wants it all. Apple is perceived to be the only hope to offer IBM a run for its money. Dealers initially welcoming IBM with open arms now fear an IBM dominated and controlled future. They are increasingly turning back to Apple as the only force that can ensure their future freedom. IBM wants it all and is aiming its guns on its last obstacle to industry control: Apple. Will Big Blue dominate the entire computer industry? The entire information age? Was George Orwell right about 1984?"

However, the creators of the ad have said that Big Brother represents something less specific than a powerful industry rival. In this interpretation, Big Brother stands for the idea that technology will be used by the few to dominate the many, and the commercial is saying that Apple's philosophy is that technology, namely personal computers, will instead liberate the individual. For the makers of the commercial, Orwell's novel epitomized the idea of technology being used to control the masses, making the reference to 1984 more than incidental.

In 2004, Apple created a twentieth-anniversary version in which an iPod is digitally added to the runner

This commercial provides examples of: