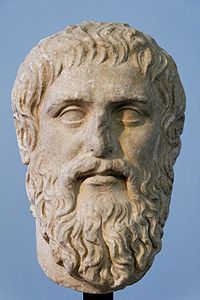 "The safest general characterization of the European philosophical tradition is that it consists of a series of footnotes to Plato."
— Alfred North Whitehead, Process and Reality: An Essay in Cosmology
Advertisement:

Platōn (Πλάτων, Plátōn, circa 428/427 – 348/347 BC) was a Greek philosopher during the Classical period in Ancient Greece. He founded the Platonist school of thought and the Academy, the first institution of higher learning on the European continent.

Plato was born in Athens to a wealthy and aristocratic family; his father was Ariston, descended from Codrus; and his mother Perictione, from Solon. He profited by the educational facilities afforded young men of his class in Athens. He met Socrates as a young man and studied under him, and Socrates' influence on Plato was a decisive mark in Plato's own philosophical career. Even before meeting him, Plato developed an interest in the earlier philosophers and in schemes for the betterment of political conditions in Athens. He even devoted himself to poetry at an early age, but all these interests, under the guidance of Socrates, were subsumed into the pursuit of wisdom, to which Plato firmly devoted himself.

Plato, whose family had long played a prominent part in Athenian politics, was expected to follow the same course, but he declined, disgusted by the violence and corruption of Athenian political life, and especially sickened by the execution of Socrates in 399. He then sought a cure for the ills of society not in politics, but in philosophy, and arrived at the lasting conviction that the ills of society will persist until philosophers became rulers or rulers philosophers.

Some time in the early fourth century BC, Plato established the Academy in Athens, the first institution devoted to philosophical research and teaching, and the prototype of all western universities. Aristotle was one of Plato's most notable students, but he disagreed with him on a lot of ideas, like his theory of forms. He also travelled extensively, notably to Sicily as political adviser to Dionysius II, the ruler of Syracuse.

After his return from his third journey to Sicily, Plato devoted himself unremittingly to writing and teaching until his eightieth year, when, as Cicero writes, he died in the midst of his intellectual labors.

Plato's influence on philosophy was massive, and came to be at least on par with Aristotle.

Tropes included in the works of Plato: