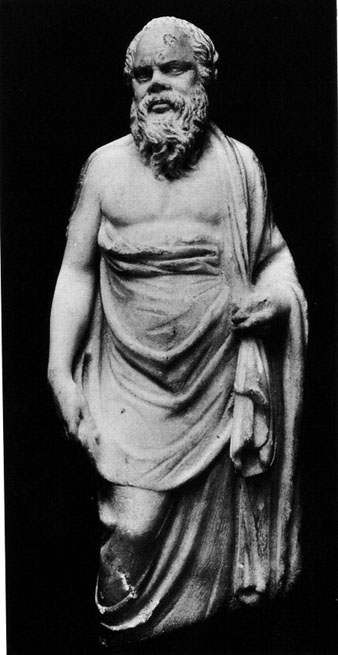 "The unexamined life is not worth living."
"To express oneself badly is not only faulty as far as the language goes, but does some harm to the soul."
—Socrates, Phaedo
Advertisement:

Socrates, commonly considered the father of philosophy (though not the first one to practice it by any stretch), was an Athenian philosopher who lived from 469-399 BCE, when he was executed in the wake of The Peloponnesian War (of which, interestingly, he was a veteran, having served with distinction at Delium in an earlier phase of the war). The earlier philosophers are, in fact, known as the "pre-Socratic philosophers".

He disapproved of writing, and so is known chiefly through the writings of his student Plato. (Another of his students, Xenophon, also wrote about him, but his works are less known. His portrayal is so different from Plato's version that it hardly seems like they are describing the same man.) Socrates taught and inspired many prominent young Athenians, from the aforementioned Plato to Alcibiades. (Plato even devoted a good chunk of his Symposium to defending against the common charge that Socrates had an affair with Alcibiades.)

The story goes that the Oracle at Delphi described Socrates as the wisest man in Greece, and Socrates, a simple bricklayer, set out to disprove this claim by seeking out all the most knowledgeable men in Greece and demonstrating that they knew more than he did. It always backfired, because Socrates, possessing basic reasoning skills, could always see and point out the massive holes in everyone's claims. For example, he tried to get Euthyphro, an esteemed religious expert, to put forth a workable definition of "piety". None of Euthyphro's attempts held up under scrutiny, and eventually he gave up and went away. In the end, Socrates agreed with the Oracle, even if reluctantly, saying that if he really did know more than all other men, it was only because he was aware of how much he did not know.

Take everything you read about Socrates with a grain of salt: Plato was very fond of putting his own words in his teacher's mouth, and it's hard to tell how much of Socrates's dialogue in Plato's works is Socrates's words and how much is Plato's. (This is described academically as the "Socratic problem".) The Apology of Socrates is usually considered the most faithful work, and it covers Socrates's trial and conviction on charges of corrupting the youth and introducing new gods. If one reads between the lines in The Republic and Symposium, it's quite possible that Socrates was guilty on both counts, though he vigorously denied the charges in court.

Socrates is associated with the following tropes: