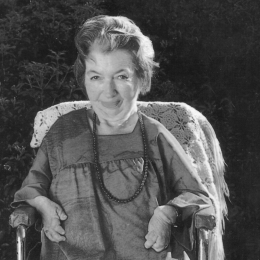 Rosemary Sutcliff CBE (14 December 1920 – 23 July 1992) was a British writer of Young Adult Historical Fiction, who published some fifty books between 1950 and 1997. She is best-known for her novels set in Roman Britain, particularly The Eagle of the Ninth. She was appointed a Commander of the Order of the British Empire for her services to children's literature.

Sutcliff was the daughter of a Royal Navy commander, and much of her work focuses on military officers and the life of the service. At two years old, she developed juvenile arthritis which partially crippled her; she spent much of her childhood in and out of hospital and used a wheelchair in later life. Medicine and disabled characters play a prominent role in her fiction. She was educated largely at home by her mother, who introduced her to literature, especially Celtic Mythology and the Matter of Britain. She also became a great admirer of Rudyard Kipling, who strongly influences her prose, settings, and themes. As a young adult, she trained as an artist, working as a painter of miniatures. A vivid evocation of visual detail later translated to her writing.

She published her first books, The Chronicles of Robin Hood and The Queen Elizabeth Story, with Oxford University Press in 1950. They were followed by three more novels before her breakout bestseller The Eagle of the Ninth, which as School Study Media became the Trope Codifier of the Lost Roman Legion for generations of children, and has inspired several adaptations including the film The Eagle (2011). It was eventually followed by seven loosely linked sequels sometimes known as "The Eagle of the Ninth Chronicles" or "The Dolphin Ring series", after the signet ring passed down through the generations of a Roman British family.

Sutcliff was commended six times for the UK's most prestigious award for children's writing, the Carnegie Medal. The Eagle of the Ninth (1954), The Shield Ring (1956), The Silver Branch (1957), and Warrior Scarlet (1958) were shortlisted before The Lantern Bearers won in 1959. She received her final commendation for Tristan and Iseult in 1971.

The official site of her literary estate is rosemarysutcliff.com

. A 1983 BBC Radio Desert Island Discs interview with Sutcliff can be heard here

Sutcliff's works include examples of:

Lubrin Dhu, the Iceni chief's Black Sheep artist son, finds himself the spokesman of his clan when they are conquered by the Attribates. He ransoms his Slave Race with the design and construction of a great boundary marker and his own Heroic Sacrifice.

Lovel, an orphan with a crooked back and foot, becomes an infirmarian monk and helps found St. Bartholomew's Hospital.

The Chronicles of Robin Hood

Tamsyn Caunter, who desperately wishes she could be a merchant venturer, must instead go to live with her uncle in London. She settles into the colourful life of the household and city while sharing the secret of their mutual seafaring ambition with her quiet cousin Piers.

Perdita Pettle, who can see "Pharisees", is granted her wish to see the Queen's Grace in a year and a day. The year passes through the adventures of Elizabethan country childhood.

Hugh Copplestone runs away from home and falls in with a company of strolling players.

The Flowers of Adonis

The rise and fall (and rise and fall and rise and fall) of Alkibiades, the notorious Athenian politician – and of Athens – through the eyes of his companions as he sets out on the Sicilian Expedition, reignites The Peloponnesian War, seduces the queen of Sparta, escapes to the Persians, is welcomed back with open arms by the Athenians, and then loses it all again.
Short Stories

A twelve-year-old girl is promised to the tyrannical chief of her prehistoric village, who proposes to sacrifice the boy she prefers to the gods who protect the great sand dune on which the village sits.

Nessan frees a prisoner intended for human sacrifice and volunteers to take his place.

A chief's daughter and a hostage from another tribe fall in love, before discovering an even more insurmountable obstacle.

Tethra, a changeling child adopted by the chief of the Epidi, is driven out to rejoin the Little Dark People. When his father is mortally wounded, he must choose between his two tribes.

The Truce of the Games, or A Crown of Wild Olive

A young Athenian runner befriends his Spartan competitor at the Olympic Games in the middle of The Peloponnesian War.

Quintus, a standard-bearer, can't marry Cordaella without a promotion to Centurion, but it will take Agricola's three-year Caledonian campaign, a mutiny, and the battle of Mons Graupius to get it.

Swallows in the Spring

A survivor of the Ninth Legion returns to Eburacum.

A Circlet of Oak Leaves

Aracos, a medical orderly, turns a battle against British tribesmen while disguised as a standard bearer.

Androphon, the son of a fort commander on the western border of Roman Britain, is held hostage by Britons during a territorial dispute.

Lucian, an army officer's paralysed son, hides a deserter from the men sent to recapture him.

Six short stories of a Romano-British family, linked by an heirloom military decoration, from the Boudiccan Rebellion to the end of the Roman occupation.

Citizens of a Scottish Royal Burgh witness its social changes and great events over the course of more than seven hundred years. Originally written as radioplays for BBC Scotland.

Myths and Legends
Novellas that include the magical and anachronistic elements of their source material.