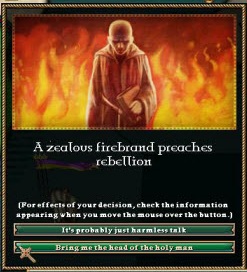 "Will nobody rid me of this turbulent priest?"
— Henry II of England
Advertisement:

An Evil Empire, Repressive Dictator, Government Conspiracy or even a Corrupt Corporate Executive has sinister plans. Where will the hero find an ally? In The Church.

A Turbulent Priest is a member of the clergy who will resist the plans of somebody with power. Usually their fight is with a secular authority who threatens the Church or general morality, but struggles against other clergy attempting to subvert what the Church stands for is just as viable a cause.

This trope can be depicted in either a positive or a negative light. If the Turbulent Priest is portrayed as in the right, his opponent is usually interested in money or power, and will quite gladly engage in animal cruelty and other immoral behavior to get it (sometimes said opponent will also attack the church to try and remove any opposition). They could also just be someone who has money or power and thinks this gives them the right to kick anyone in their way, with this often being Truth in Television regarding such situations. If he's in the wrong, the Secular Authority is generally trying to improve society, and the Priest is afraid of change. The Trope Namer (see below) is actually quite neutral by most understandings.

How the Turbulent Priest conducts himself depends on his rank and standing. If he is the equivalent of a Monk or Parish priest, he may offer sympathies to the hero. If the work is set in The Empire or similar, expect him to be part of La Résistance and usually given more freedom than the average citizen, because the Church retains some power and would not like to see its clergy picked on. If the Turbulent Priest is a bishop or other high-ranking member of the Church, expect him to publicly decry the plans, and encourage resistance. If his beef is with one person, sometimes questioning whether his soul is as safe as he thinks is an effective deterrent. Both styles may overlap with a Badass Preacher or a Church Militant; the antagonist one is usually a Sinister Minister.

, who spent most of his tenure arguing with King Henry II over his plans to exercise increased royal control over the Church in England, leading Henry II to utter the quote at the top of the page. There was no real right or wrong side from a modern perspective, as Henry saw clergy abuse the Ecclesiastical Legal system to escape secular punishment, and Becket saw the sovereignty of the Church as being threatened by an overreaching monarch; in summary, both were convinced the other was going to make a power-grab then abuse that power. Interestingly, what Henry actually said about Becket is not exactly known, though several of his knights apparently took the quote as a royal execution order, and murdered the Archbishop at the altar of his own cathedral, getting their king in trouble with the Pope.