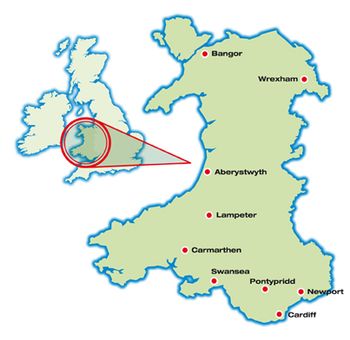 "Mae hen wlad fy nhadau yn annwyl i mi,
Gwlad beirdd a chantorion, enwogion o fri;
Ei gwrol ryfelwyr, gwladgarwyr tra mad,
Dros ryddid collasant eu gwaed."note The land of my fathers is dear to me, / Old land where the minstrels are honoured and free; / Its warring defenders so gallant and brave, / For freedom their life's blood they gave. — but this translation isn't literal and so is actually possible to sing. The more literal version is impossible to sing to the same rhythm.

Cymru, the land of the Welsh Dragon, Tom Jones, Revived!Doctor Who, Torchwood and the rest of The BBC Sci-fi/fantasy TV programs.

In Roman times, the whole of Great Britain was inhabited by a Celtic population. During the Dark Ages, the Germanic Anglo-Saxons invaded and took over most of the island, but one of the parts they didn't take over was the little corner we now call Wales.note The others were Scotland, Cornwall and Cumbria. Wales was conquered by the English in The Middle Ages and became legally a part of the Kingdom of England — which is why there's no "Welsh Bit" of the Union Jack, which was formed from the flags of the Kingdoms of England, Scotland and, later, Ireland. Being conquered and repressed has given Wales both a strong sense of identity and the mother of all chips on shoulders. Do not call Welsh people "English"; it will cause immediate and lasting discomfort (ditto for Scottish and Irish people).

Although long treated as a separate nation to England for cultural purposes, Wales was still part of England for legal purposes until 1967.note To this day, most laws refer to "England and Wales", and the two share most procedure, in stark contrast to Scotland where the legal system works rather differently. It was not until 1972 that its borders were clarified. Cardiff (Caerdydd) had been proclaimed the capital of Wales in 1955. This was mostly because it was Wales' largest city; there was no government based there at the time, and pre-conquest Wales never really had a fixed capital. Since 1999 Wales now has a devolved assembly based there, albeit one with less power than the Scottish Parliament. This reflects the overall state of Welsh affairs at the moment. Although Welsh is by far the healthiest modern Celtic language and Welsh identity is widespread and firm, the vast majority of Welsh are, all things considered, quite comfortable being British (not English, of course—British), and are certainly nowhere nearly as interested in independence as the Scots. Some have even noted a reluctance on the part of the Welsh Assembly itself to ask for more power from Westminster (in contrast to the Scottish Parliament, which even under the Scottish-Unionist Labour/Lib Dem coalition clearly wanted a bit more authority for itself).

The Welsh language is a Celtic tongue that predates the Roman conquest. It is closely related to Breton and Cornish (spoken in the northwestern French province of Brittany and Cornwall, respectively, with all three making up the Brittonic or Brythonic subfamily), and more distantly related to the Goidelic Celtic languages - Scottish Gaelic, a surviving native language of Scotland; Irish, the native language of Ireland; and Manx, spoken on the Isle of Man.

Welsh is generally regarded by English-speakers as a formidably difficult language, and a glance at the map shows such jaw-crackers as Machynlleth, Pwllheli, and the truly majestic Llanfairpwllgwyngyllgogerychwyrndrobwllllantysiliogogogoch

. As a result, Welsh speakers tend to find it absolutely hilarious when non-Welsh speakers try to pronounce Welsh words and names. That said, the pronunciation rules are consistent (unlike English) and once you know that a "u" is pronounced "ee"; "dd" is a hard "th" (as in 'there' rather than 'think') ; and a "ll" is a sort-of cross between 'l' and 'th', then it will always be so, although the actual spelling (and hence pronunciation) of a word may change depending on the word preceding it. "Cwm", that perennial favorite of crossword-puzzle enthusiasts, is pronounced "coom" (and means "a hollow in the side of a mountain"). Welsh vowels ('a', 'e', 'i', 'o', 'u', 'w', and 'y') have two distinct pronunciations: one long, one short. For example, 'mẁg' (with a vowel sound like the one in 'book') and mwg (vowel sound like in 'pool'). In addition there are two variations of "y", which can be heard in "yn" (like 'un-' as in 'unhealthy') and "byd" (like 'bead') (obscure and clear sounds, respectively). Welsh English often uses "like" as an interjection, but contrary to stereotypes the word 'boyo' is practically nonexistent.

The Welsh language was suppressed with varying degrees of viciousness by the English from the Middle Ages right up until the 1960s, but since then it has become one of the best-subsidized minority languages in the world, and nowadays around 20% of Welsh people can speak some Welsh, with 14% claiming to use it on a daily basis. Northern and Southern versions differ in details, and 'gogs' (as North Walians are referred to in the Southnote Southerners are referred to as 'hwntws', that being everyone born on the 'wrong' (south) side of Cader Idris is a 'hwntw') are sometimes said to sound like Russian porn stars. Welsh is accorded equal status with English within Wales, so all roadsigns and official notices have to be in both. (East of Conwy, English is given precedence. West of Conwy, Welsh comes first. Welsh language roadsignage generally begins at the border: visitors are often consternated that Welsh signage begins even before you have left Chester, largely because Saltney, although part of the city of Chester, lies within Wales. (Big supermarkets in Oswestry, nominally inside England, have bilingual signage.)) The language is the butt of many jokes in England, usually along the lines of "Welsh is very difficult to speak unless you have either a lifetime's study, or a serious throat infection".note To be fair, the Dutch say the same thing about their own language. Welsh spellings are also the subject of English humor, sometimes being attributed either to anagrams of breakfast cereal names, some form of encrypted message used by intelligence agents, or escapees from H. P. Lovecraft's less well-known works.

There is also a community of Welsh-speakers in Argentina, dating back to the 19th century, and Welsh is spoken in Patagonia, albeit with a Spanish accent.

Wales is notable for its sheep population — c. 10.9 million of them against a human population of about three million. So, the usual jokes apply. Wales is also notable for its level of rainfall — even more so than the UK as a whole. Second city Swansea (Abertawe) officially holds the distinction of "wettest city in Britain".

The majority of the population live in the southeastern corner, in the corridor between Swansea and Newport. The mountainous middle of Wales is quite sparsely populated. This, as well as the lack of north-to-south transport links (trains from Cardiff to North Wales go through England), mean there is a degree of cultural separation between the North and South of Wales. Historically, Wales' population was more dispersed, but South Wales (and to a lesser extent, Wrexham and the North East) boomed in the 19th century due to immense coal deposits. A lot of Welsh cultural identity stems from the 19th-century mining industry, when "the Valleys" saw religious revivals, the enthusiastic adoption of the game of Rugby, and a great tradition of choral singing.

The heavily industrial economy ensured that Welsh politics have always favoured the left. This has continued after the industry declined, as Margaret Thatcher is often blamed for the post-industrial misfortunes of regions like "The Valleys" (to the north of Cardiff). In 1997 and 2001, the Conservatives failed to win a single Welsh seat, although they have since made some inroads. Wales also has its own secessionist party Plaid Cymru ("Party of Wales"), who tend to have the most support in the rural areas.

A lot of people in Wales are called Jones, Williams or Davies, due to the way the Welsh Patronymic naming system was Anglicised — people in small villages will have to use their first names or get nicknames to distinguish each other. Traditionally these were often in the form of "Surname The Occupation", such as Jones The Steam [engine driver] from Ivor the Engine. This results in SAT exams (see British Education System) having to have candidate numbers in Wales. This is also the case with soldiers in Welsh army regiments, who even in the late 20th century were still identified by their unique Army number and not by one of a limited number of family names. Although Jones is traditionally considered the Welsh surname, current surveys show that the most common surname nowadays is Williams — Owen, Jones and Powell then tied for the next most populous name with Davies and Hughes coming up not far behind.

There are two regiments of the British Army that require their officer candidates to be fluent, and ideally bilingual, in a language other than English. One is the Gurkha Rifles and the other is the Royal Welch Fusiliers (they were founded in 1690, and still insist on the archaic spelling of the word currently rendered as "Welsh").

There are a lot of famous Welsh people such as:

"The land where history sleeps, and so does everybody else."
— Griff Rhys Jones
"I think most of all, the Welsh were doomed by English superiority to become objects of terminal quaintness. The quaint language, the quaint songs. Those amusing choirs and chants"
— Simon Schama's A History of Britain

Alternative Title(s): Land Of My Fathers And Their Sheep